It is often seen that price moves in sideways most of the time and trends in one direction the other time.  Some times during these movements, price tends to open higher or lower than the previous days close. These gaps often show market participants enthusiasm in buying or selling the stock. There are two gaps observed in stocks which are gap up and gap down.

Gap Up: Let us consider that a stock closed at 1000 rupees on day 1 and has opened at 1050 rupees on day 2. This jump in price from 1000 to 1050 directly is termed as a gap up opening. There are several reasons for this gap up opening and one of the reasons could be the results of the company being announced. The gap up opening signifies a very strong bullish sentiment.

Common Gap: Common gaps also termed as trading gaps are frequently seen in the market. These gaps are observed when the market is in a range. Common gaps get filled in a short period of time.

Filling a gap means that the price reaches to the point where it was on the previous day of the gap. Many times common gaps are accompanied by low volumes. As per Dow Theory, movement in price should be in association with volume. Gap Up/Gap Down with low volume shows the weakness in trend. So, the price reverses and fills the gap.

Breakaway Gap: This type of gap is usually observed when price moves in congestion or a narrow range. Upper channel of the congestion zone acts as resistance and lower channel acts as support. Price breaks out of this congestion zone with good amount of volumes. After the gap is observed, market may move in the direction in which the gap has occurred.

People who hold positions on the other side of breakout are forced to close their existing positions which further increase the momentum in the price.

Runaway Gaps: Runaway Gaps usually occur in the middle of the trend. This signals the strength of the trend caused by new interest in the market. Runaway Gaps can be seen in an uptrend and downtrend as well. Runaway gaps lead to huge losses for those who are on the opposite side of the gap. A sudden increase in the interest can be due any announcement by the company following which new people who couldn’t enter at lows now try to enter at the current market price/high. 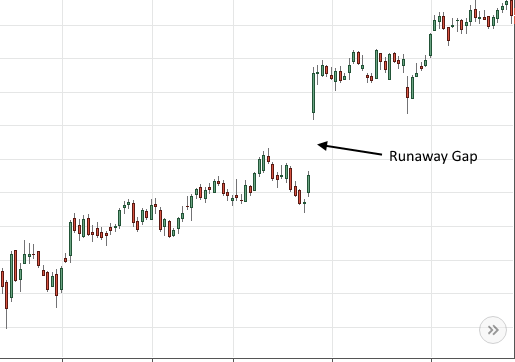 Exhaustion Gaps: These types of gaps signal a reversal in the trend. Exhaustion gaps occur at the end of the current trend. This situation when someone is trying to offload a large volume of stocks. A large gap is accompanied by huge volumes and an immediate selloff can be seen due to profit taking.

Exhaustion Gaps provide a high risk reward trades. In order to distinguish between exhaustion and runaway gaps, one must keep an eye on the volumes and compare it with the average volume of that stock.