An Identifier is a name used to identify a variable, function, class, module or other object. It starts with a letter A to Z or a to z or an underscore (_) followed by zero or more letters, underscores and digits (0 to 9).

Following characters are not allowed to use within identifiers

Following is the list of python keywords/reserved words which cannot be used as constants/variables/identifiers. All the Python keywords contain lowercase letters only.

Like other high level languages, Python does not provide braces to indicate blocks of code for classes,function definitions or flow control. Blocks of code are denoted by line indentation.

The number of spaces in the indentation is variable, but all statements within the block must be indented the same amount. For example −

Thus, in Python all the continuous lines indented with same number of spaces would form a block. The following example has various statement blocks − 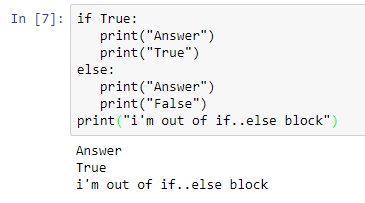 A New Line Character is used to end a statement in Python. In order to denote the continuation of the line, Python has a provision of using line continuation character (\). For example − 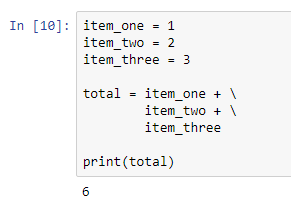 Statements contained within the [], {}, or () brackets do not need to use the line continuation character. For example −

Python accepts single (‘), double (“) and triple (”’ or “””) quotes to denote string literals. The string must start and end with the same type of quotation.

The triple quotes are used to span the string across multiple lines i.e. paragraph. For example, all the following are legal −

word = ‘word’
sentence = “This is a sentence.”
paragraph = “””This is a paragraph. It is
made up of multiple lines and sentences.”””

A line can be commented out in python by putting a hash sign (#) before the line. Python interpreter ignores all the characters between (#) sign and the first new line character.

A line containing only whitespace, is known as a blank line and will be ignored by Python.

Waiting for the User

The following line of the program displays the prompt, the statement saying “Press the enter key to exit”, and waits for the user to take action −

Multiple Statements on a Single Line

The semicolon ( ; ) allows multiple statements on the single line given that neither statement starts a new code block. Here is a sample snip using the semicolon −

A group of individual statements, which make a single code block are called suites in Python. Compound or complex statements, such as if, while, def, and class require a header line and a suite.

Header lines begin the statement (with the keyword) and terminate with a colon ( : ) and are followed by one or more lines which make up the suite. For example −

Variables in Python are reserved memory locations to store values. This means that when a variable is created, a space is reserved in memory. The interpreter allocates memory based on …